OK, I’ll try and keep this rant a bit shorter, in the hopes of actually being able to post more often. I’ve actually been doing pretty good, BG-wise, for the past few weeks. Except for waking up at about 60 in the morning, which I’m afraid to play with since everything else has been going so well.

Which leads into my rant, which is about the level of technology available for use by people with diabetes. Don’t get me wrong. I love having a pump, and I’m really glad I didn’t get this disease until after the availability of home BG testers (not to mention really REALLY glad that it was after the discovery of insulin, unlike one of my great-grandfathers, who died in the early nineteen-twenties a few months after being diagnosed - wonder which type he was). But, the technology just isn’t quite "there" yet.

For example, why isn’t there some way of telling if your bottle of insulin has gone bad, other than injecting it and waiting to see what happens?

I tend to be both incredibly sensitive to insulin and to carbohydrates. This is wearing off a bit as my honeymoon ends, but last February I had a correction factor of 1 unit for 80 points and BG readings that were just all over the place. So my doctor suggested I wear the 72-hour continuous glucose monitor to see if we can get a picture of what the heck was going on. Wow, that will really be useful, I thought. Until I found out that I don’t get to see the numbers. And that the piece of equipment you had to wear looked like a Radio Shack remote control from the 1970s. And that the thick rubber cable didn’t detach when you took a shower, so you had to wear it in a baggie around your neck in the shower. I suddenly knew how a cat feels when it has to wear one of those plastic Elizabethan collars. If I had cat ears, they’d be flat back against my skull. Mad, and humiliated. And wet.

My CDE explained to me how to enter in all my carbs, exercise, and readings (and I’m not even going to go into to user interface design here). She also mentioned that it won’t pick up readings below 45 or so.

"But will it beep or something if it gets that low, to warn you?" Well, no. That would be the next generation. Lovely.

Anyway, I wore the thing and dutifully entered everything I could think of. I even ate the same breakfast and lunch every day, and have virtually the same dinner, too, to eliminate as many of the extra variables as I could (two or three out of dozens, doesn’t really help, but made me feel more in control ; )

My fingersticks were my typical 60-220 or so. I had one reasonable day and a couple of bouncy days. Then I turn in the monitor and get a copy of my readouts in the mail.

Whoa! Turns out one night, where I’d gone to bed at about 160 and woke at 70, I had really nose-dived immediately after falling asleep, hit "too low to read" by 1 am, and despite my body trying three times to push my BG back over 70, it didn’t happen until I woke up and had breakfast. I was psyched about the 70, but then ate the same breakfast as the day before and this time went over 220 with it. I had two lows around 50 late that afternoon too.

So what would happen, I keep asking myself, if my liver didn’t kick in at 2am and try to dump in some sugar? For that matter, what did happen, between 1 and 2 that night? I don’t know, I was asleep. And just how often does it do that, anyway?

For months I tried setting alarms at random points during the night, only to discover the diabetic’s equivalent of the Heisenberg uncertainty principle: you can see what your BG is, or you can sleep, but waking up enough to measure it basically stops what you’re trying to measure in the first place, and shifted my predictable late-afternoon low to random times throughout the day. 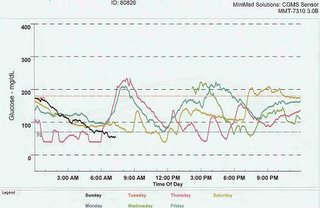 Here’s a shot of the CGMS readings, each day a different color. Keep in mind this was with food and exercise levels as close to identical as I could make them.

So after months of pestering my CDE that there has got to be something better out there, I find out about the study. It’s for an integrated pump and continuous monitor. You wear a sensor that’s inserted like an infusion set, (and then taped in place) and it broadcasts readings to the pump, giving you a continual readout. Great! There’s a six month study period, followed by a six month extension, where both the sensor and control groups get to use the sensor. I am so psyched about this, this may be my only way of tracking down my incredible bouncing BG to some sort of reasonable a1c value.

So I go for the preliminary screenings, wear the klunky old CGMS around for a week (can’t see those readings until the end of the year), and finally get enrolled – in the control group. Man, that was disappointing. So for the past five months, I’ve been using a pump and monitor for the study that I like less than my Animas 1200 and UltraSmart, and uploading my values a few times a week, plus talking to the dr’s once a week or so and tweaking my basal settings. It took four months of guesswork for my readings to get to something approaching the level of control I’d be happy with, and of course I’m amazed it’s stayed okay for even these last few weeks. It’s so frustrating to know with a sensor I could probably straighten things out within a week or so.

But, I’m trying to look on the bright side. Right now, what I’m thinking is that I have documented evidence of six months of intensive work between me, my doctor, and my CDE, resulting in an average a1c over this time of: 8.0. Really, eight point frigging oh! How on earth can I put this much time into something and not see some better results! Oh, yeah, bright side, bright side.... Well, what I’m thinking is, when I also have six months of documentation on what my BG is with the sensor, I’ll have a very good argument for my insurance company that I need this device! And that paying for the sensor might be cheaper than paying for me to have a weekly appt with the doctor, not to mention the complications that I’m trying like mad to avoid...

So anyway, that’s where I’m at now. So much for the shorter post - it’s just that when I’m pissed ("motivated") enough to write, I tend to just dump it all out. Stay tuned for a report on the sensor, which I get to use just in time for Christmas ("Hey, watch me eat this brownie!")

Have a happy turkey day, all!

You are officially "linked" from my blog.

And I'm very interested as to the outcome of your Quest for (CGMS) Gold. I've been giving the device a lot of thought lately and consider myself an ideal candidate (Brittle diabetic, anyone? Tests updated of 15 times per day? Kind of bouncy sugars? Why yes, that's me.) I'm looking forward to the updates on your site about The Quest.

Joseph is now wait-listed to do a 7-day stint with the CGMS through our clinic (his bgs have been bouncing all over the place lately as well).

I will be very curious to read of your experience with this!

you're linked :-D i'm really interested in CGMS - I wish that I could get it - or get involved in some sort of trial - but it just doesn't seem like it's going to happen for me :-( good luck and keep us updated ...

Can I get more information on the integrated pump/CGMS?? We've been waiting, sure that someone would come out with one soon.

My husband is a diabetic, a lifer type-1 guy, 32 years now. His 'warning system' for lows has failed in recent years and the CGMS becomes more and more crucial. We're watching the Guardian RT info closely and would love to keep an eye out on this integrated solution.

Just stumbled onto your blog (not sure why I hadn't found it earlier...).

I'm totally with you around the technology. Sure, it's all better than it was 10 years ago, but dammit, it doesn't move far enough fast enough. Arg.

Anyway, back to catching up - I'm enjoying your blog so far, and will set up a link this afternoon!

Thanks for sharing with us!