DexCom versus The Other Guys: Twelve Thoughts

I am in a fairly unique position with regards to the new continuous glucose monitors. I partcipated in a study with an integrated pump and monitor (you know the one) where I got to use it for six months, and then went out and bought a DexCom, which I have been using for two weeks now. So I thought I’d give you the lowdown on them. Remember, this is only my opinion, your mileage may vary, etc, etc, etc.

So, here’s my notes on who beats who for various categories:

1. Size of transmitter: DexCom wins. You get a little rectangular plastic doohickey on a large white pad that’s the size of the other transmitter. Plus, DexCom has no wires, while The Other Guys (hereafter TOG) have a little 3-inch wire tether between the sensor and transmitter, which I wound up having to over with a second piece of IV-3000 so the wire didn’t catch. That brings me to the next item:

2. Sensor and water: this is a toss-up. DexCom says not to cover your sensor, except for short periods of time like a shower. I’m not going to pay $ for the big cover-up every time I shower, so I just shower with the transmitter/sensor still uncovered on my leg. Sometimes it’s a bit off for an hour or so after, other times it stays dead-on. However, when I have covered the sensor, about half the time my improvised multi-IV-3000 patch leaks, and I walk out of the shower with the sensor in a little bag of water taped to my leg, and it’s off for much longer. With TOG I never had to worry about the sensor, happy under it’s IV-3000 blanket. However, read number 4 below:

3. Accuracy in the 200-400 range: Hey, am I supposed to admit I still go this high with a continous monitor? Well, I do, and I would say both seem pretty good in this range.

4. Accuracy in the 30-100 range: DexCom wins, big time. If I look over my six months of records with TOG, it claims I’ve been below 70 maybe a handful of times. Not True. My favorite was a gardening low where I felt low even tho sensor said I was 160. Tested in at 30. I hit 30 while on vacation last week, and DexCom read 36. Much, much better. The times when the DexCom sensor is off are when it’s still drying out from one of my bad shower patch jobs. In fact, that’s when it acts like TOG – maybe theirs is affected by the humidity under that patch and they just haven’t figured it out yet?

5. Size of receiver: TOG definitely win on this. DexCom’s receiver is way too big, and awkward to stuff in your pocket. I like the size of the screen on the DexCom, but maybe in version 2.0 they could move the buttons to the top and slim it down a bit. I mean, TOG has all the same kind of stuff in there, plus a full insulin pump in almost half of the space.

6. Flexibility: TOG lets you program in a lot more choices: alarm volume, etc – DexCom pretty much lets you set the high and low alarm numbers (it also has a built-in non changeable low alarm at 45). TOG would let you specify when to re-alarm if you are still low x minutes after the first alarm. Plus, DexCom’s picture driven menu is just a pain in the butt to use. Either use that extra CPU space to do something useful, or let me have the option of a single menu with “start sensor/stop sensor/set alarms/set date”. I don’t need the cute little animated transmitter. Really.

7. Accessories: TOG wins here too. Because it’s a pump, it has the standard belt clip plus all those companies making pump cases, etc. DexCom comes with a psuedo-leather, black plastic case with an annoying cell phone clip on it. You know, the ones that stick out like a little flat-topped mushroom on the top and hook into a too-small clip that keeps falling off your pants? Plus, it clicks whenever you bump it: CLICK…CLICK…CLICK. Yuck. 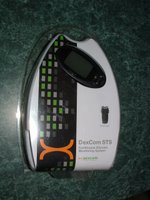 8. Packaging: I have to say, I know it doesn’t matter in the long run, but my DexCom came in a plastic case, that looked like I bought it off the shelf at Target. Much nicer than the standard cardboard-box-with-label. I felt more like a consumer of geeky electronics than a medical patient.

9. Battery usage: For both, the transmitter battery is understandably sealed. TOG’s pump-and-reciever works on a AAA battery, while the DexCom needs to be recharged every 3-4 days. It would be convienient to keep the charger at work, because that’s where I sit still the longest, but then I might forget it on the weekend. The don’t recommend charging it in bed, because the range may be a bit less while it’s charging, but that’s what I have been doing anyway. Come on, guys, drop a double-A into it, please.

10. Receiver range: Seems about the same on both. Both occasionally flake out in bed. I can live with that, I suppose, but I don’t like it. Maybe Navigator will fix this.

11. Sensor insertion: Once they’re in, I never felt either sensor, though TOG's transmitter would sometimes catch on somthing and feel like a pinch. DexCom has a thinner sensor wire, but TOG has a reusable inserter that is spring-loaded. With DexCom, I can’t help feeling that part of the $35 cost is the big plastic inserter I have to throw out with every use. Plus, I really can’t bring myself to do thumb-on-the-plunger insertion with something that big – I wind up holding it in place with one hand, and slapping the plunger down a la whack-a-mole with the other.

12. Software: I’m not sure if the software I used for the study is available to those who buy TOG, nevertheless they win because DexCom doesn’t have any yet. I know, it’s in the works and I’m waiting for it, but I really miss being able to print out my single-day summaries.

Well, I’ll probably have more to say later but that’s it for now. For me #4 is the only real point. That’s what I want the thing for, the rest is just fluff. I’m sure as these products mature, they’ll move a lot closer together – especially if insurance would start paying for them, a lot more people would use them.
Posted by Val at 12:27 PM

Thanks for sharing this review... I am actually taking part in a field trial with DexCom on Tuesday.

Basically, I am going to recive instruction on how to use the DexCom and be started on it on Tuesday morning. I will be able to wear it for a week,for free, to see what it's like & then at the end of the week, they'll download my readings and I'll then decide on whether I want to purchase it at a discounted price.

At this point, I dont' know if I'll be able to purchase this system. Money is just a little too tight right now- that is, unless it blows me away- but I figure it doesn't hurt to try it out and see how it goes... Also, I think I become elgible for a new pump next year (possibly the 522 w/ sensor) so I don't know if it would be worth it for me to purchase this right now.

It definitley helps me to hear about your experiences and the ups and downs of each system... I'm hoping that I'll really learn a lot from using this and that it's a good experience...

Thanks again for your update on things! :)

Very valuable for us to get these views from someone who has used both.

Thank you for taking the time to share that with us!

Thanks for the run down.

I'm scheduled for a 3-day continuous monitoring deal with TOG next week. I have a pump from them, too, but for some reason I've been leaning toward the Dexcom. Dexcom has been a little cheaper (but I think they've recently raised their prices), and the sensor size difference is somewhat of a big deal for me (though, I'm not sure why).

So I'm curious, what was it that originally made you go out and get the Dexcom in the first place?

Please do keep us posted.

Thanks for all this information. O's endo is really hot on the DexCom. I think the 522/722 would be better on a kid - less stuff. But the practise isn't writing off-label scrips for it and since O is only 11, she's out of luck. I do have her down to do a DexCom study in January. I hope she gets in because her numbers are horrible. We just did the three day thing and it was completely depressing to get those results.

Thanks for the useful comparison. When I listen to the reps and read the literature it's very easy to accept it all without questioning, plus the rep. from Minimed that I've spoken with does not have diabetes so he's not really experienced with their 522 gizmo.

I hope we see other reviews like this - they're invaluable.

I'm considering a Dexcom purchase and didn't realize that TOG existed! Real-person reviews (i.e. not salesperson reviews) are VERY helpful. Thanks much!

Why Does Dexcom think nobody has a Mac? There software is PC-only. Bummer.

Hey guys, I just found your blog about DexCom. Although it's fairly old (your last entry I mean), I still have a couple of questions:

- I'm from Europe and I'm looking for a way to find a cheaper possibility to get the DexCom. So far no health insurance pays it and it would mean a one off expense of roughly 4000 USD + monthly 350 USD. What are your monthly expenses for it?

- How do you guys in the US get the equipment? Do you need prescription from an US doctor or can you just go and buy it? I would be businesswise once a year in NYC.

- Do you think a German could simply go and buy one device in the US?

To answer anonymous - you do have to have a prescription for the dexcom. I'm not sure what the current costs are for the system - I think sensors would be $450 for 4 without insurance. I can get 14days from a 7 day sensor a lot of the time.

You should check into the Animas Vibe, just approved in Europe, that uses dexcom sensors with Animas insulin pump.

For more up to date info on dexcom, etc look at www.tudiabetes.com which has dexcom user groups.

For those outside of the US wanting to buy a Dexcom: you need a US prescription/doctor's script to order it, which is hard to get. However if you contact the European Dexcom importers you may have more luck, as the medical laws are not as extreme as in the US. I purchased mine in the Netherlands, it's a mmol/l device not mg/dl and in Dutch but easy to operate as the menu can simply be compared with the English one. However it is more expensive than in the US.