Note - I wrote this post overa week ago and hadn't gotten around to downloading the pictures to go with it...
Yes, just a few weeks after upgrading to the Dexcom Seven, I am participating in yet another CGMS study, this one using the Minimed Guardian system. Unfortunately my Dex was in a Day 11 fade-out when I got the new system, so I don’t have a good comparision, but I may try to put a new Dex 7 sensor in at the same time I put in my last sensor for the study.

In the meantime, here’s some comparison pix (please excuse the quality I’m not at my best first thing in the morning):

The sensors (side view, I know they look a bit beat up – sorry) Yes, the Minimed really is that much thicker) 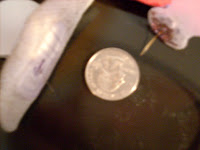 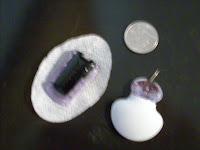 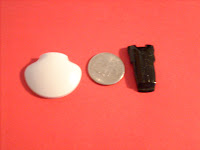 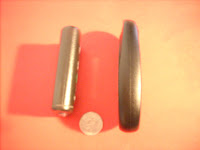 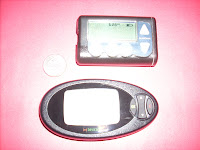 Now, having been completely exasperated with the MM product in the first study I did, I’m going to revisit some of my original concerns.

Accuracy at BG readings under 100: I still feel the Dex is more accurate here; but I currently set my low threshhold on the Guardian to 100, meaning that it sets off the “predicted low” alarm when I’m around 85 in real life. So, it’s something I can work around.

Features – by this I mean how much can you customize the alarms. The Guardian wins hands down, having not only a “crossing threshhold” alarm, but alarms for impending highs or lows, and for rapid rise or fall rates, as well as a “snooze” feature (meaning beep again in 20 minutes if I’m still low, or 2 hours if I’m still high), and a regular alarm clock feature. Everything is configurable. Dex only allows you to set the low and high alarm threshholds.

Software – OK, I don’t actually get to use the software until the download at the end of the month, but I was able to look it over at the doctors office, and it is much better than the Seven’s reporting software.

Added bulk – I had been resigned to the Dexcom’s big bulky oval, but didn’t realize what I was missing until I have the Guardian’s reciever, which is basically a minimed pump with the pump guts taken out. Very easy to slip into a pocket, while the Dex reciever is too large to do much except clip on a belt.

So now, having lived with Dex for over a year, I’m starting to think about more than just the accuracy. I mean, I can easily work around the Guardian’s flaw by setting my “low” level to 100. But how to you work around lame software, limited configurability, and the bulky receiver? Next year when my pump goes out of warrantee it might be worth it to go for the all-in-one system. I’m tempted.
Dexcom, are you listening?
Next post - I remember what irritated me so much about MM in the first place....
Posted by Val at 8:55 PM

Nice comparison...i am a Dex3 user---but my 7 has been shipped. Animas 1250 pumper - but i have decided that when it is time for a new pump - i will very likely go with the MM as well. I love my Dex and have no complaints...until i consider all the bells and whistles that come along with MM.

I got to try out the MM with the pump - my friend has a MM pump/CGM - and we swamped pumps for a week.

I like the Dex sensor better, and i think the accuarcy is better on Dex--and with Dex you can use some tricks to get CGM reads in sync with meter reads if they are way off---(see tudiabetes - CGM users group---i have a posting on that tip) I dont care for how MM says no more than 4 calibrations a day.